Michael Mather has been contributing to Scottish archery for the entire modern era of our sport. As an archer he has been a gifted junior, a senior internationalist and coach/mentor. For 2 decades he organised the Scottish Outdoor Championships (1986 – 2006). From 1999 till 2001 he held the post of Vice President of the SAA and subsequently was President from 2001 till 2006. On retiring from that post he was awarded Life Membership of the Association. However in 2013 he stepped back into the role of SAA chairman/CEO retiring a second time in 2019. For many, many years he was and still is the guiding hand at GA. Additionally he now runs his own company (MRM Archery) specializing in “come & tries” and teaching archery. Michael is also a qualified SAA Regional Judge and a County Coach. Currently he is club membership secretary. We dragged him away from archery things for a chat…

Michael, how long have you been shooting?
I started shooting in 1972 at Bellahouston Sports Centre, and apart from a few very short periods when I gave up the sport (the longest for 6 months) I have been at it ever since.

Why did you take up archery?
I saw a short article on archery on a BBC programme and felt I really wanted to give it a go, so persuaded my parents to take me to Bellahouston to give it a go ~ and never looked back.

Did your improvement as an archer come steadily or did it come in big jumps/plateaus?
My years as a junior did not see vast improvements as I had to keep trying to persuade my parents to buy me new kit as I grew out of the old stuff. However, by the time I was 18 I was practicing 5 days a week, and with a fantastic coach I managed to improve and retain my standard. What was important was not to get disheartened when the improvements reduced in magnitude. Plateaus are inevitable ~ the key is working out how to make the next step up, and having clear goals is one of the keys for this.

Over a 20 year international career, Michael competed for Scotland on more than 40 occasions. In 1985 he was lying 4th in the British Championships till injury necessitated he retire on day 2. He did however win Scottish Junior champion in 1978 and was Scottish Senior champion in 1989. Michael attained Master Bowman (in the top 5% of archers) in 1979 and maintained this standard for more than a decade.

When was your first competition? Can you remember how you did?
I was about 13, and my first competition was an outdoor event in Kilmarnock. I missed far more than I hit, but I really enjoyed it – to the degree that I then pestered club members to take me to shoots until I had my own transport.

Why did you stop competing?
Primarily, my career got in the way. My employment meant that I travelled a lot at the time and I was working long hours in Edinburgh so did not have the time to devote to practice. I was aware that without practice I could not maintain the level that I wanted, and therefore was unlikely to win ~ and winning was important to me!

Have you felt the desire to compete again?
Yup ~ but I would only do so if I was confident that I could achieve the standard that I want, and this would require lots of focussed practice.

What’s been your greatest or favourite moment in archery?
Greatest moment ~ winning international competitions. Favourite ~ being so heavily involved in the Archery World Cup Finals in Edinburgh in 2010 – incredibly tiring, but a fantastic buzz.

Conversely, which has been your least favourite moment in archery?
Being the 3rd man in a 2 man team for the Commonwealth Games in Brisbane in 1982 ~ and therefore getting to stay at home hoping that one of my team mates would injure themselves.

Worst injury in archery?
None ~ I have always tried to make sure that I warm up before shooting and warm down after finishing to minimise injury risks. Once did get a large skelf in my hand from a stand.

Your equipment obviously plays a huge role in archery, and for his entire career Michael has been a recurve archer although recently he did break with tradition and acquire a horsebow. Which kit has got the Mather seal of approval over the years…

So which pieces of kit do you use?
Samick Masters Riser, W&W Limbs, combined to make 68” bow. For about 20 years I shot with an Arten Olympic sight until it gave up the ghost and broke, so swapped over to a Spigarelli 30 Carbon sight. I have always used an ‘open’ sight ~ basically just a ring with no pin in the middle as I believe that this helps to prevent over-sighting. My arrows are ACCs, and I have been shooting with the same spine for about the last 5-6 years.

As a recurve archer, have you ever considered compound?
Yes ~ indeed I have even shot one. However, as recurve is the style that I have shot all of my archery career I have never felt the urge to change to compound as I still get a real buzz out of shooting well with a recurve. I may well move to compound at some point in time, but not right now.

With archery apparently taking up his every waking moment (and probably quite a few of his sleeping ones) … after so many years, how does Michael feel about archery… 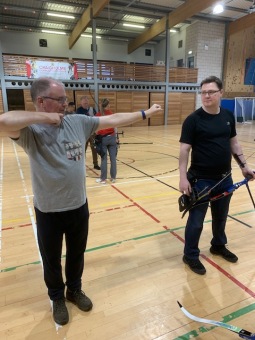 Between your company MRM Archery, judging and currently being membership secretary of Glasgow Archers … do you ever want to escape archery?
I would have to admit that there are occasions where I would happily see the back of the sport. But then something will come along, such as a contract MRM had for teaching archery to blind children, or involvement in the Archery World Cup finals in Edinburgh (2010) that gives me such a great buzz it re-invigorates my enthusiasm.

Had you not taken up archery, which sport would have liked to have taken up?
I did do fencing for a while and really enjoyed this ~ however as I had fairly thick glasses and did not wear contact lenses I could not see my opponents well enough to compete effectively – and I like to win!

Finally … any future archery goals?
In the longer term I would like to get back into competition, although my own archery business commitments make this rather unlikely. Overall I would like to help archery in Scotland to grow significantly over the next few years.