Target archery rounds provide a standardised method for archers to compare scores. There are many different rounds each with its own name and consisting of a set number of arrows at one or more distances and consistent target sizes.

There are two basic types of rounds imperial and metric. Imperial rounds are also known as GNAS (AGB used to be called the Grand National Archery Society) or English rounds (if you dont live in the UK), whilst metric rounds are known as FITA (WA used to be called Fédération Internationale de Tir à l’Arc) or WA (World Archery) rounds.

Most rounds use four main face sizes; they have a diameter of 122cm, 80cm, 60cm and 40cm (boss and faces assumed to be full sized). The 122cm face fills the boss, one 80cm face fits on the boss, two 60cm faces fit on the boss, and finally four 40cm faces can be fitted on the boss. However, there are a few exceptions.

All imperial outdoor rounds are measured in yards, and use a 122cm diagram face (they fill an entire boss) at all distances. The following table lists all the recognised imperial outdoor rounds. It shows the number of dozen at each distance. For example a Western round is 4 dozen at 60yds and 4 dozen at 50yds both distances shot at a 122cm face. The Gents and Ladies columns shows the age at which the round is usually shot. In addition due to tradition, these rounds are shot with 5 zone scoring (9,7,5,3,1) by colour. The names are traditional and IIRC they were named after the place they were popular. 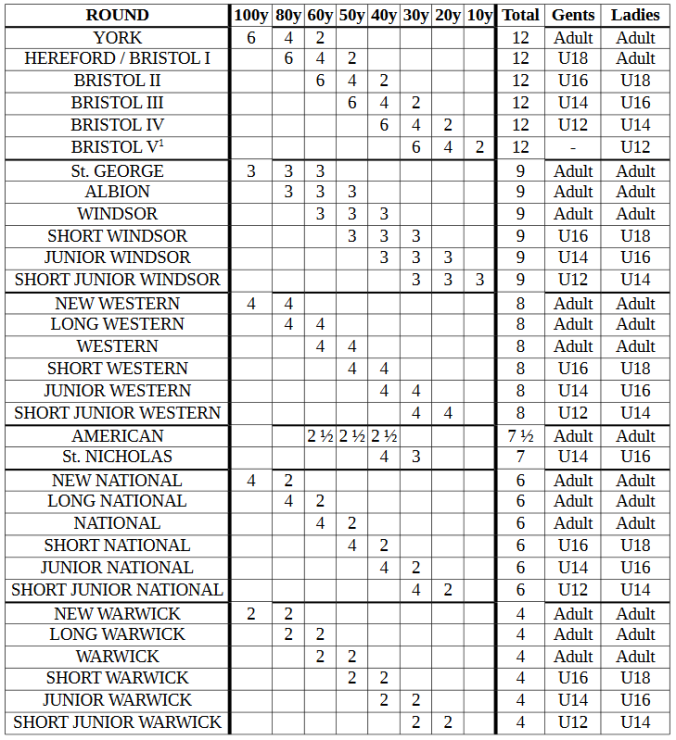 All metric outdoor rounds are measured in metres and use 122cm and 80cm faces. The following table lists all the recognised metric outdoor rounds. It shows the number of dozen at each distance and face size. The Gents and Ladies columns shows the age at which the round is usually shot. Here 10 zone scoring is used which was brought in either because euros are obsessed with base 10 OR because the 5 zone did not differentiate archers well due to the 5 zone being large and accuracy was getting better as we moved into the modern era of archery (sights et al). 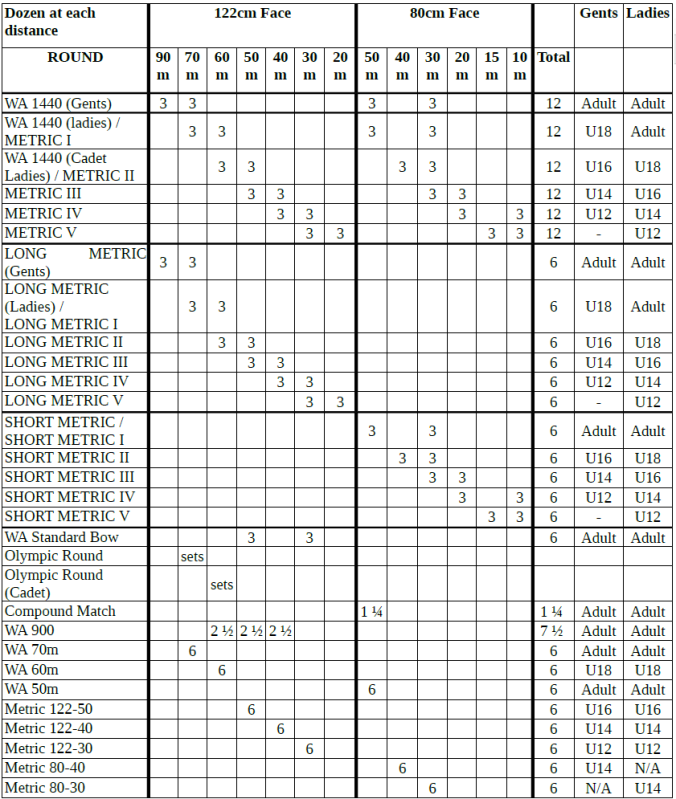 Again there are metric and imperial rounds when shooting indoors but there are far fewer rounds when compared to outdoors. The following table lists all the recognised indoor rounds. It shows the number of dozen at each distance and face size. There are a variety of different faces but the most common are the 60cm and 40cm faces. All as shot with 10 zone scoring with the exception of the Worcester which is shot with a 16 inch, 5 zone target (actually a field face – white dot for 5 points and rest of the target black with 5 arrow ends rather than the usual 3).
For extremely good archers/compounders or for the Vegas round, triple faces (3 targets per archer with only 6-10 scoring zones) can be used to prevent damage to arrows if shot in close proximity and they clash/robin hood. 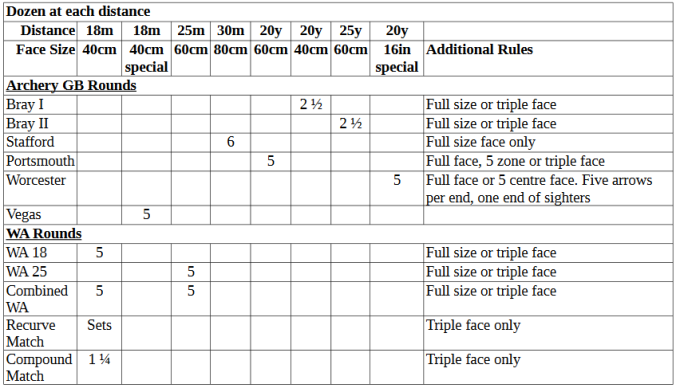 For all rounds, imperial or metric, you shoot the longest distance first and then moved down the distances finishing with the shortest distance. You generally get six arrows of sighter’s at the first distance shot, you do not get more sighter’s when you change distances. This means it is important to have sight marks for all the distances contained in a round you intend to shoot.

Junior and beginners are not expected to shoot distances they are not capable of. Generally archers should be capable of scoring 200 on a 122cm face with 3 dozen arrows before moving up to the next distance.

It should be noted that juniors are not expected to shoot long distances even if they are shooting well at shorter distances. The table below lists the maximum distances each gender/age group is expected (but not limited) to shoot. The reason for the recommended maximum distances is that it avoids juniors drawing a higher poundage than they are physically capable of holding without damaging their body’s development.