Target Archery is probably the sort of archery that pops into your head when you think of competitions with a bow. The 2012 Olympics probably gave people in the UK their first real view of archery outside of movies and as the viewing and attendance at Lords Cricket ground was among some of the best received events … people in the UK liked what they saw. A large number of archers took annual holidays and spent a week on the couch watching the entire event live. (editor: I did this and it was fantastic although my couch still has a dent from my butt) 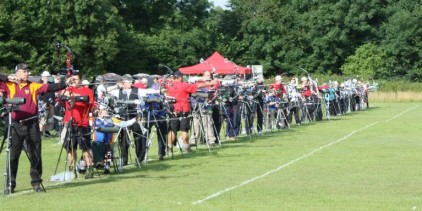 The vast majority of target archery competitions involves shooting a set number of arrows at each of one, two, three or even four distinct distances while aiming at a face (the multi-coloured circular thing) of set size for that distance. The field will be as flat as is possible. The arrows are shot in ends (your turn) of 3 or 6 arrows (3 at the shorter, 6 at the longer distances). These ends are shot in a very formal manner with a time limit which minimizes any possibility of injury and delay. A series of whistles or coloured lights (not dissimilar to traffic lights) are used to keep competitors appraised of how long they have left to shoot and when its safe to collect arrows respectively. Competitors are split by type of bow type, gender and age group and in most competitions the winner of each sub group is the person with the largest score.

This is the very core of archery. The art of  repetition. Archers embrace the grind of shooting methodically however this sort of competition does not make a good spectator sport. Even archers find this dull to watch with nothing to grab the attention. No drama (well, not often unless something breaks), no tension, no spark. If you aren’t bringing a bow to an archery competition, bring a book! Its worse than cricket.

Alternatively (as showcased in the Olympics) you can shoot in a knockout competition called a Head to Head where archers shoot directly against an assigned opponent usually determined in a ranking round shot as above. Each 3 arrow end constitutes a set worth 2 points if you have a higher score than your opponent (if tied 1 point each). First one to 6 points wins unless its all tied at 5 apiece when its a one arrow shoot off – nearest the spider (centre cross) wins. The 2012 Women’s Olympic gold medal came down to a one arrow shootoff and breathing was optional! (see Ki BoBae v Aida Roman) These matches can get very tense, makes for good spectator viewing as seen by the Olympics and is the format that World Archery deems to be the present and future of competitive archery.

A vast video library of head to head target archery can be found on World Archery’s  Youtube channel.