The horsebow was used by Mongols, Huns, Avars, Persians, Byzantines as well as many other horse dependant cultures throughout the late Roman, medieval and early renaissance period. In addition, it is the forerunner to the modern recurve bow. It is always relatively compact (many similar bows have been discovered in numerous regions throughout the world) as it was designed to be used from horseback. The rider would tightly grip the horses body with his knees and thighs thus freeing his hands for using the bow. With a little flexibility it is possible to shoot in at least a 300′ arc around your horse – even directly behind (called the Parthian Shot).
Editors note: We have tried this by sticking a club horsebow owning archer on a vaulting horse and putting him in various orientations on the line. Worked perfectly. 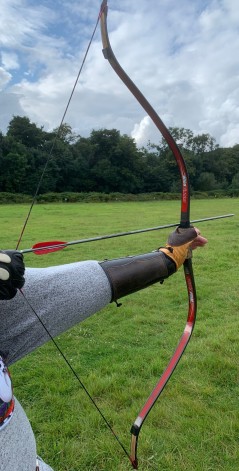 These bows are extremely sophisticated with the bow stave being made up of a laminate of wood, horn and sinew held together with glue created from animal carcasses (including boiled swim bladders from fish!). To get more poundage into such a small frame the bow features the recurve which is a secondary bend of the bow near the tips curving away from the archer. This can be accentuated by adding long levers (sometimes called sayah) at the tips to increase the leverage. This creates a smaller, faster bow than the longbow. By faster we mean the stored energy is transferred to the arrow (called the ‘cast’) very quickly in comparison to a longbow.

This bow does not need the same range as the longbow because of the horse archers improved mobility over the foot soldier and individual accuracy is more useful in a whirling cavalry melee or while riding in front of massed ranks of infantry than long range massed fire. As a result horsebow poundage varied greatly but today you will find most are in the 35# to 45# range and shot using woodies (wooden arrows) often with points known as modbods (modern bodkins) – the descendant of the piles used to kill french knights. 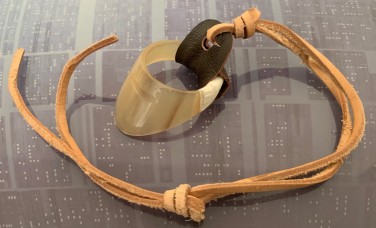 You too can be a danger to worms!

The other big difference is that Asiatic horse archers do not use the Mediterranean draw (three fingers) but instead use the thumb and forefinger to draw and using a thumb ring to protect against the string and the draw is all the way to the ear. Also in a shock to newer archers, the arrow now rests on the right side of the bow once nocked, not the left (as is normal for a right handed archer). The archer also draws to the ear.

In todays competitions within Archery GB, there is (at present) no separate category for traditional style bows of this sort but they can be used in competitive events under the recurve barebow classification. This is a little unfair, it would be better to have a traditional classification for horse and longbows but AGB tends to be very resistant to change. Generally it is frowned upon to utilize sighting or other such aids when using this bow type and the preferred method of shooting relies primarily on instinct. As a result of the entertainment value delivered by these bows, they are often shot for fun by other styles of archers – for those days the stresses of your normal bow get too much. In addition, there’s something very satisfying about doing a field course with a horse bow.

For some gorgeously made and pretty damn authentic horsebows and accessories, your first stop should be Csaba Grozer‘s website.