This is a traditional type of bow that has been in use for many centuries and there are strict rules as regard dimensions, materials etc. Effectively a sophisticated sort of self bow were the stave is cut from the tree so that the sapwood (on the outside of the tree) becomes the back two thirds and the belly; the remaining one third is heartwood. The longbow gets its strength from the 2 different sorts of wood operating in opposition when the bow is drawn. 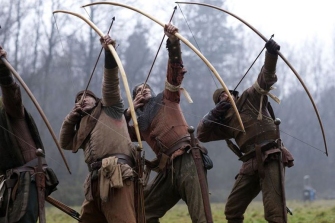 These bows were more a long range, artillery barrage type weapons used en mass where weight of fire (Arrow Storm) was more important than pin point accuracy. Medieval archers with high poundages on their bows could manage 12 shots per minute, Just on that figure, a typical english army of 5000 archers in theory could put 60,000 arrows in the air in 60 seconds.

English and Welsh archers are the best known with their victories over the French at Agincourt, Crecy and Poitiers … but there are other longbows not quite so well known such as the Hindu Indian longbow which was made of bamboo and the Japanese Yumi bow which is asymmetrical.

Today the (English) longbow is used in various competitive events and has a separate classification from all the other bow types. Entire societies of archers exist dedicated to preserving the shooting of this sort of bow i.e. British Longbow Society, English War Bow Society and even the International Longbow Archers Association.
Editors note: I’m not sure if you MUST love real ale if you are a longbow archer but a disturbingly large number do. Also I know that at least one of the above associations have a loyal toast to the Queen with a glass of port before they start competitions. Alcohol and archery … sounds good to me. I wonder …  Shooting line, waiting line, tent line, bar line!

Modern Longbows are typically in the region of 60# draw weight however a variant of this is the warbow which is extremely high poundage (150# to 180#) and requires years of practice to prepare the body to actually be able to fully draw the bow more than a few times. Prolonged use will actually change the shape of the users bone structure. Perfectly preserved examples of the warbow were recovered from the wreck of the Mary Rose.

Two fine (if expensive) exponents of the longbow boywer’s craft are Richard Head and Pip Bickerstaffe. And if you want to check out how to make a longbow … have a look here.