Now while Flight involves shooting as far as you can, Clout requires you to shoot your

arrows into the grass. Honestly! Admittedly you need to drop them as close to a specific spot on the field as possible but you’ve been hitting the grass since you were a noob so how hard can it be? Well the distances are pretty far. It can be anything up to 180 yards for the Imperial Round.

To visualize, imagine you’re shooting into a target face lying flat on the field with the flag in the centre. To get a gold or more precisely “a clout” (worth 5 points) you need to be no further than 18inches from the marker pole/flag. For the next additional 18 inches you drop a further point ie 18-36 inches = 4points, then its 3 – 6 feet = 3 points, 6 – 9 feet = 2 points and 9 – 12 feet = 1 point. This is done with a multi coloured rope (just visible in the picture) attached to the flag and then moved round in a circular fashion. Each coloured zone on the string is the appropriate number of points. Obviously you have to be very careful with footing … one miss-step, a crunch and someone is not going to be a happy archer.

A single clout round consists of 36 arrows, shot in ends of 6 arrows. Tournaments typically consist of a double clout round, in which a total of six dozen arrows are shot. World Archery has its own version of clout which for gents is shot at 165m for recurve and 185m for compound. The scoring bands are 1.5m wide with a clout still being worth 5. 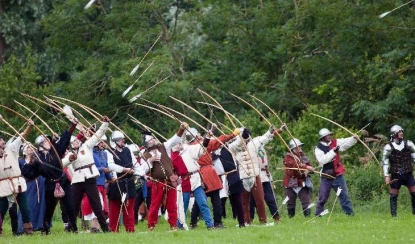 “Shooting the Mark” or “Roving Mark” is a military variant of clout shooting.  In medieval times, a roving band of archers would shoot at called adhoc targets as practice for combat situations as they rove about the countryside on a sunday morn. (There was, and still is to this day, a legal requirement for males over 14 practice to archery at least 2 hours a week in England**). This type of shoot has been revived in recent years although in a far safer and organized manner. If it wasnt done as a formal shoot, a nice sunday morning down Chatelherault Country Park could get a little frisky. Nice article about this VERY traditional round to be found on this longbow archery website

Clout competitions are rare but there are some shot in central Scotland with Bannockburn Bowmen being one of the organizers.

** ps: its also still legal to shoot a Scotsman in York with a bow any day bar a Sunday so if visiting a York based archery club, be mindful of whistles.